When I started doing these 31 Days of Kindred blogging, I was about four posts ahead, so I wasn’t trying to do a new post the day it was supposed to post. That lasted until… probably Day 5. But I had fine intentions.

And thus, I find myself writing a blog post on Christmas. And also Hanukkah, and Kwanzaa tomorrow, but my family mostly just does Christmas, with a bit of Festivus thrown in. Also my mom is a Dudeist Priest, so she wished me a Merry Dudemas this morning. Sadly, I am out of vodka. 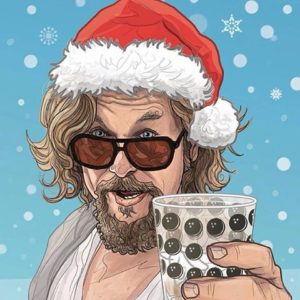 Anyway, point is: Today’s going to be a short one because kids need me to put batteries in things and tell them where Lego Batman is supposed to go to get the Bat-Ground-Pounder Suit or something. But because I love you, internet, and because 31 Days are 31 Days, I’ve got a blog post under all gift wrapped just for you.

It’s actually a bit about the thumbnails I used to write the first draft of the script, which I somehow forgot to include when I was on the subject during the first week of blogging, even though I wasn’t rushing to type under a deadline. Regardless, here it is. I hope it fits.

Now, I know it’s not that Tickle Me Amazon Echo you were asking for. And yes, it is a little blurry. But allow me to contextualize.

As I was working on the first draft of the script, I came to a point where I realized I had about 70 pages left of the graphic novel page count left to work with, but about 120 pages of novel left to adapt. So, each tiny square in that picture is one of those 70 pages, and each scribble, doodle, sketch, or random phrase in each square is what needed to happen on each page, in order to get to the end of the story by the end of the book.

And it worked. Sort of. I mean, most of the work I did in these little squares was edited down or reworked or cut out. But none of that editing could have happened if I hadn’t powered through to a finished draft.

So, there you go.  A bit of early draft behind-the-scenes goodness to warm your heart for the holidays. Now, I must go. Apparently Lego Poison Ivy poses an insurmountable challenge.