Every New Year’s Day, preeminent digital comics font purveyors Richard Starkings and John Roshell aka Comicraft have a New Year’s Day Font Sale, where all of their fonts cost the year (so $20.17 all day tomorrow.) Mostly to remind myself to take advantage and stock up on some new fonts (and to bring the attention of any letterers reading this to a pretty good deal) I thought I’d use today and tomorrow’s blog posts to talk about the double-invisible art of comics lettering.

I’m calling it “double-invisible” because comics itself has been referred to as the “Invisible Art” by Scott McCloud in Understanding Comics, and the best lettering doesn’t call attention to itself as a discrete component at the expense of the overall goal of storytelling. Integrating text into the artist’s images in a way that complements the visual style, doesn’t cover up anything important in the art, and moves the reader’s eye from one panel to the next in the correct order, is challenging work that probably receives the least attention of all the comics art specialties.

Starting with my first self-published comics series in 2001 (Whisp, with artist Dann Tincher), I taught myself to letter in Adobe Illustrator. At the time I didn’t even have my own computer, so I feel comfortable in saying I’ve come a long way since then. I have at least learned how difficult it is to letter well. From font choice, to balloon placement, to the thickness of word balloon lines, to the location of the balloon “tails” (the bits that point to whoever’s talking), lettering is the art of little details that succeed most if they move your reading experience along.

The Comicraft folk, along with Nate Piekos of Blambot, represent the vanguard of digital comics lettering, which is what I do, because my left handed handwriting is all doesn’t go in a straight line even if the paper is college ruled.

For Kindred, the font used in dialog is MangaMasterBB, a Blambot font family. The narrative captions are in the font MyUnderwood from Tension Type.

To give you a sense of how lettering is all about small details: On other projects I usually mix straight and curvy balloon tails, but our editor on Kindred said it was better to stay consistent with one or the other, so I went with curvy since both the editor and I agree that curvy looks more “conversational.”

Probably the showiest task of the letterer is sound effects. This is especially true for something bombastic like superhero space god fights. See basically anything John Workman letters over Walt Simonson’s art: 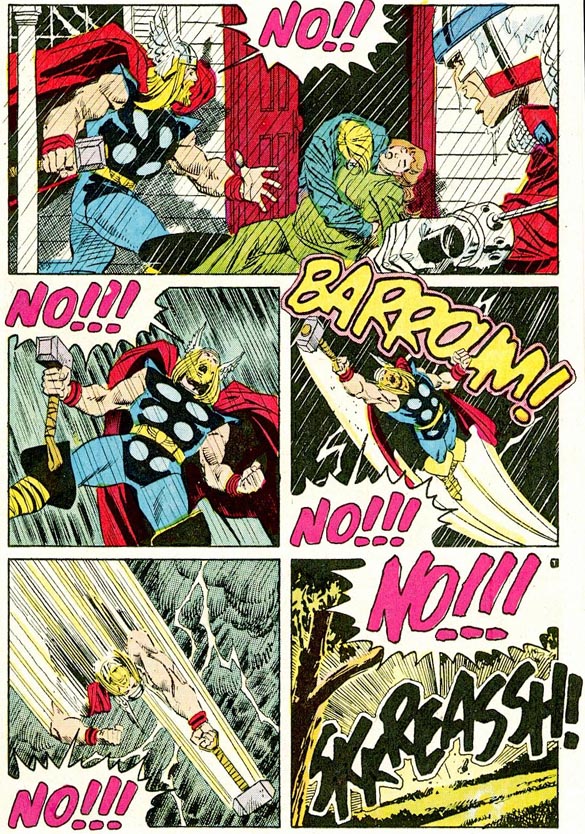 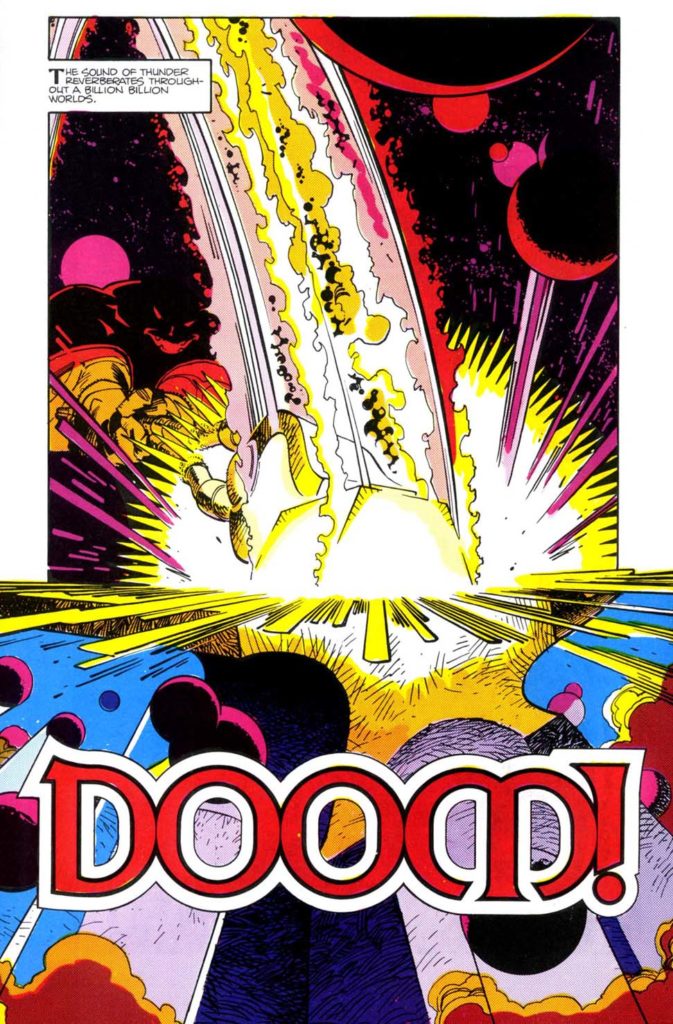 Of course Kindred is a much more subtle story, thematically serious in its historical and social meanings, so I tried to use my lettering to deal with particularly loud sounds, or sounds that I repeated for narrative purposes. (For example, a creaky door is shown a couple times, and then later the sound of the same door appears “off camera,” to signify someone is entering the attic.)

But even some of those ended reading as too “cartoony” for the subject matter. At least according to our editor.

I thought this was a pretty good SPLSH, but you won’t see it in the finished graphic novel. I guess it IS pretty cartoony…

Not that I’m bitter. It’s just one sound effect.

But look at it! Doesn’t it look like water splashing sounds?!! Validate my onomatopoeic glory!!!

Anyway, tomorrow, after I buy some discounted fonts for future projects, a more in depth discussion of the parts in Kindred where I used non-standard word balloons, and the relationship between panel borders and time travel.

Those of you who party into the New Year, enjoy your New Year’s Eve partying. If it gets super wild and you jump into a swimming pool with your clothes on, I bet it’ll sound like