I mentioned in my Day 3 post how someone asked me if I grew a beard while writing the first draft of my script because I was trying to be like the character Kevin. I said no at the time, and denied it again yesterday. But, since writing yesterday about the various postmodern acrobatics I went through to get out an early draft, I’m come to realize that maybe I did kind of turn myself into Kevin. I mean, in that script Dana’s narration, which seems to be directed to the reader, is also shown to be directed at Kevin. So, in a way, sorta kinda, I made up this scene where I turned into Kevin, and Dana told me how to adapt her story. Because I needed all the help I could get.

Here’s the thing about Kindred you don’t really notice as a reader: The writing of the passage of time is complicated and interwoven.

But I don’t really mean the time travel. The time travel is as straightforward as it is inexplicable. Dana’s in ’76, boom, now she’s on a Maryland plantation in the 19th century.  The century-hopping scenes were the easiest ones to nail down in the script.

But the little moments…

There is a way Butler weaves moments together in prose that does not easily lend itself to comics. Often in the story, Dana will relate something happening in the present moment of the narrative to past events that haven’t described before. Here’s a small example, from part 8 of “The Fall,” where Dana talks about reading to Rufus:

“I opened the book and began to read. We had finished Robinson Crusoe long ago, and Kevin had chosen a couple of other familiar books from the library. We had already gone through the first, Pilgrim’s Progress. Now we were working on Gulliver’s Travels” (pg. 102).

A simple few sentences, but they catch the reader up on a significant portion of time experienced by the characters (the time it takes to read Pilgrim’s Progress out loud) that is otherwise not portrayed in the book. As a reader, this isn’t especially noteworthy. The aside provides context to the events that are the primary focus, the events of the last day Dana sees Rufus as a child.

Because, to adapt the book into a graphic novel that both had room for art in it and was not 1300 pages long, I had to basically take the story apart, figure out which pieces were necessary to make the story work, and which could be left out without drastically changing characters, motivations, or events that are impacted later. But, when the events are so intricately woven together, these are difficult distinctions to make.

In the end, disentangling the events Kindred required the same tools I always use when approaching difficulties in life: Doodles & sketches. 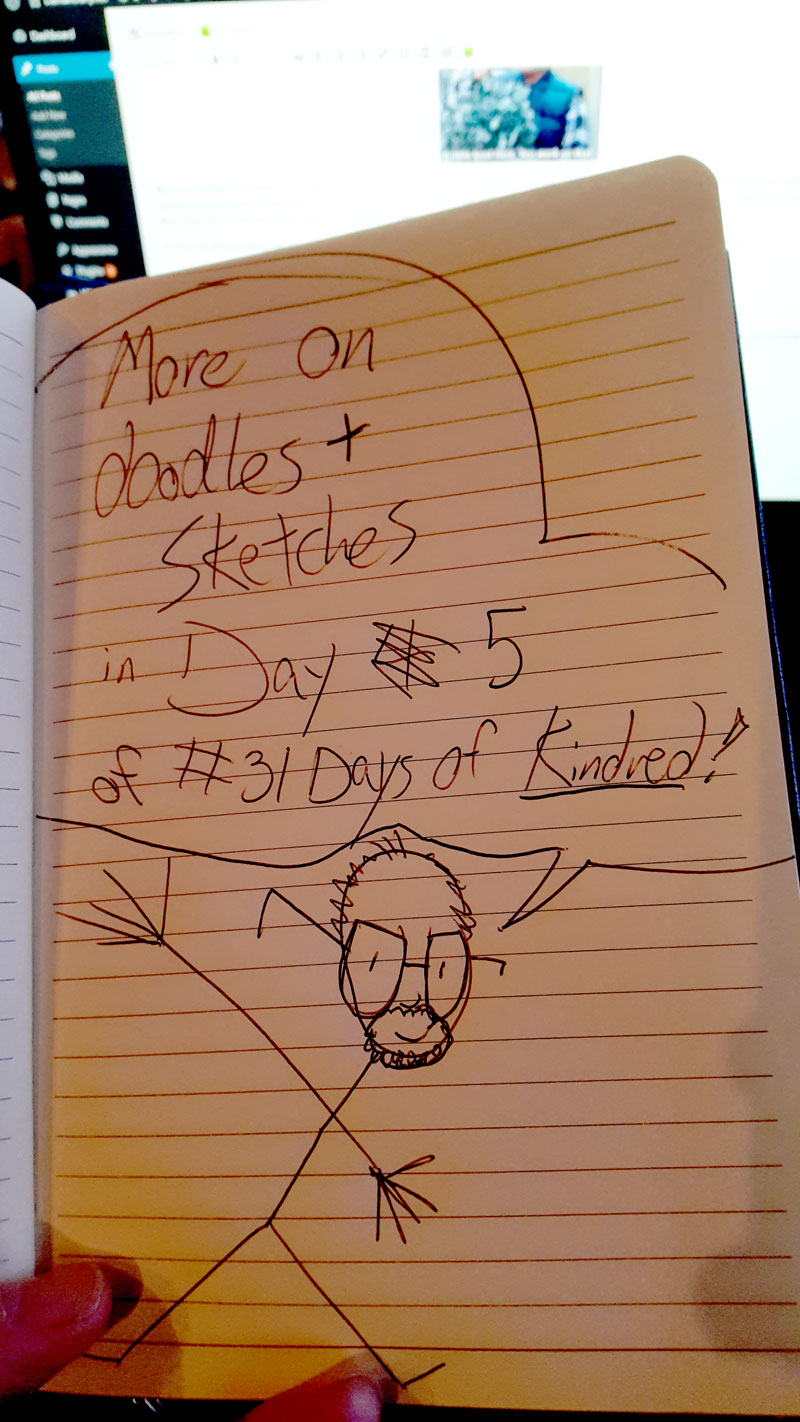