In yesterday’s post, I dipped a toe into looking at the evolution of the three comics adaptations I’ve written and/or drawn, noting the increasingly wide audience, and thus increasing editorial input, on the process of making the works.

Each adaptation also deals in their own way with issues intrinsic to Kindred: “Trees You Can’t Climb” deals with with time travel (via memory in the story, via 3D virtual reality in the), and family (multiple generations of a black family in a rural American setting). “Day 8” deals with poverty and systemic racism. CyberNavigator Stories deals with learning, literacy, and work.

Kindred is very much about family, since Dana travels back in time to meet her ancestors. “Trees You Can’t Climb” is also travelling to the past, but via less fantastical means–a depiction of recalling childhood memory. But, in both instances, family becomes a lens through which to consider the passage of time, and, ultimately, mortality. Dana’s time travel hinges on the fear of mortality, while John’s autobiographical short story, on which  “Trees…” is based, was a response to a writing prompt: Tell the story of when you first realized you would die. John as a child comes to understand mortality when a neighbor dies, and he looks at his grandparents, and mother, and then himself. In both adaptations, trees themselves become a visual metaphor, for genealogy (family trees), as well as for differing time scales (compared to trees, humans are short lived). 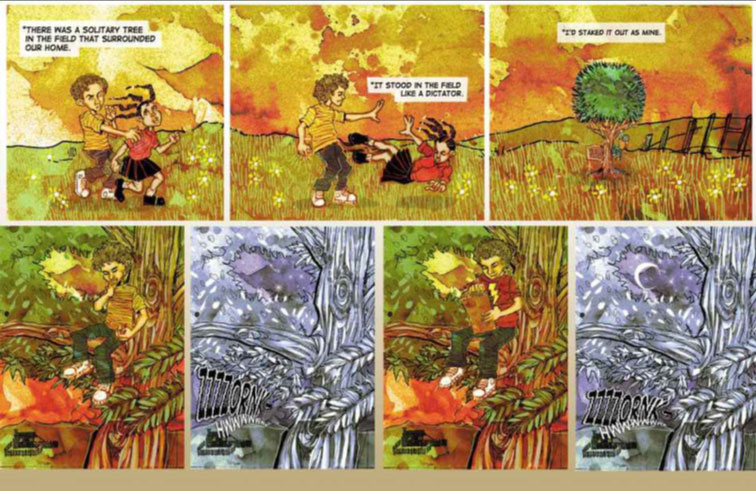 “Day 8” also shares a genealogy with Kindred, but a genealogy of the social neglect that comes with entrenched poverty and white supremacist systems of oppression. While the people in New Orleans who were left behind were of course not slaves, they were often treated in ways that echoed the dehumanization of slavery. And, as in Kindred, the effects of storms and illness were addressed in ways that privileged the white and moneyed above all. 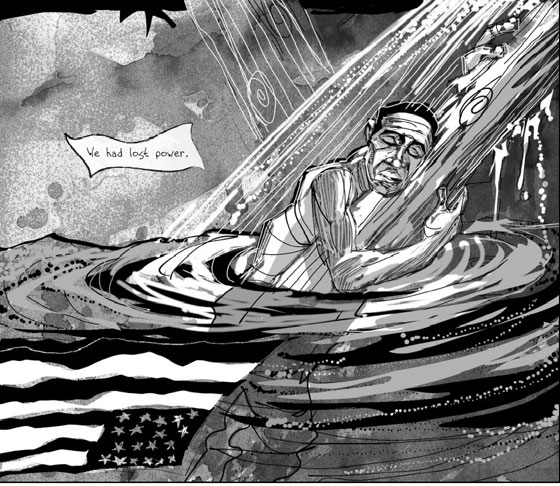 In Kindred, when Dana first meets Kevin, the narrator tells her future husband how she’s tried going to school to be a nurse, secretary, and teacher, but quit all those career paths because they didn’t mean anything to her–she wants to be a professional writer. Ironically, Dana ends up having to do the work of all three jobs during her travels to the past. In part, this seems to reference one of Octavia Butler’s impetuses for writing the novel. In addition to wanting to make people understand history on an emotional level, Ms. Butler also spoke about remembering being embarrassed by her mom’s work cleaning houses, but how she had since come to recognize that the labor and sacrifices of earlier generations were what allowed progress. Her mom’s work was part of what resulted in Butler growing up to become an author whose contributions to American literature cannot be overstated.

Part of the work Dana does is teaching. She teaches slaves to read, which was forbidden by slave owners. Education and literacy were always foundational components to freedom. In some cases, literate slaves could literally write their own pass to freedom. And, while the computer literacy being taught in the CyberNavigator Stories comics is not illegal or forbidden, it is still essential to things like earning a living, or being able to afford healthcare. 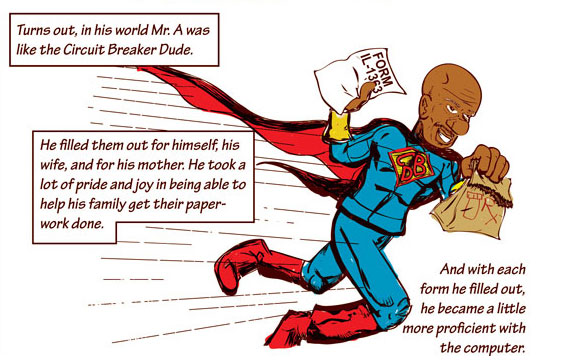 So maybe there is some evolution to be traced in these projects. The development of themes and issues in my own work that resonate so strongly with the themes of Kindred.