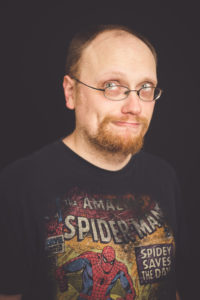 Damian Duffy is a cartoonist, scholar, writer, curator, lecturer, teacher, and a Glyph Comics, Eisner Comics, Bram Stoker, and Hugo Award-winning, #1 New York Times bestselling graphic novelist. He holds a MS and PhD in Library and Information Sciences from the University of Illinois at Urbana-Champaign, where he teaches courses on computers & culture, and social media & global change.

The co-editor of the Black Comix Returns art book from the Magnetic Collection at Lion Forge Comics, Damian has given talks and lead workshops about comics, art, and education internationally.