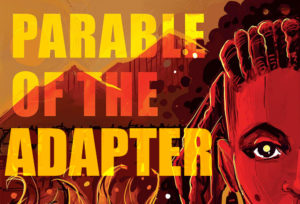 I’ve been working on writing the script for the graphic novel adaptation of Parable of the Sower. I’m about halfway through.*

(*Or rather I was when I originally wrote this post. I’ve just now come back to it today, at the point where I’m working on the script for the sequel, Parable of the Talents, and there’s an Advance Readers Copy out there with rough art and a for-placement-only narration font.)**

[**And actually, by the time I got around to finishing and publishing this blog post that has sat in my drafts folder since October of 2019, I’ve now turned 40 years old and am 2/3 of the way through the script for Parable of the Talents. But the stuff below still applies.]***

{***And then, a month later, I wrote the last couple paragraphs of this. Lost track of what I’m talking about yet?}

Anyways, I don’t think I’ve really, fully admitted this to anyone, including myself, but: I’m not doing awesome.

I mean, I think the script is going fine, [well the book is released in two weeks {has been out for three weeks} so I hope so] no worries there Octavia fans. I’m definitely doing the thing I did on early drafts of Kindred, where I contort myself to avoid cutting things out and suddenly I’m halfway through my page count and a third of the way through the novel. That’s some unhappy math, when I know it’s time to start murdering darlings. (Which also takes on a very literal meaning in Butler’s Parables.) [And even more so in Talents.]

But, listen, if you haven’t read the book or its sequel? Know that the prescience of its on-the-ground, slow-motion American apocalypse is chilling. In a conversation between the main character, Lauren Olamina, and her best friend, Joanne Garfield, Joanne asserts, “You can’t read the future. No one can.”

Like a lot of things in these books, that’s a true statement. There’s a lot of truth in this novel, published in 1993, set 30 years in the future. The economic and environmental catastrophes of climate change raging unchecked. The death of the middle class and the thriving of stark income inequality. Civil society privatized and sold off; vulture capitalist corporation salivation over the fire sale of human rights and natural resources; presidential administrations offering some potpourri of avarice and the kind of Christianity that really means white supremacy. How could Octavia E. Butler have known?

Because Octavia E. Butler was paying attention. To Amercian politics, to global warming, to the basics of human history, to where things were headed.

And, on a personal level, I’m trying to do that too. Look at the direction where things are headed.

So, this book {and its sequel} is {are} depressing because it is {they are} built on hard truths. Plus I got depression.

This will always be funny to me forever.

I’m not much on talking about myself, as you might have noticed from how much I update this blog (which I think at this point, isn’t “blog” just Internet speak for “old person text wall” anyway?)

[And, hell, it took me like four months and a middle-age milestone just to finish this solid wall of words, so, really, who knows what this blog is for.]

{And now it’s a month after I wrote that!}

At any rate, I’ve yet to schedule my TED Talk about how my depression taught me to live the journey of my tomorrow’s yesterday’s truth, or whatever. It’s a thing I have. I get sad. I wake up wearing the metaphorical “I’M THE GUY WHO SUCKS” t-shirt. I take meds for it, which helps all right, but not always. Sometimes I get mad at my kids for their fake mixed martial arts fights in the living room.  Or I get mad when one sibling tells the other they hate the other and I’m like, in my head, “You assholes you love each other and I love you both!” And then, right after a stressor like that, my body just kind of calls it a day. Boom: I’m tired, exhausted. And I hate myself. And I assume everyone else does too. You don’t do you? Do you? Oh, you didn’t before, but now that I’m asking you incessantly, kinda?*

And, at those moments, I know I could be doing a better job of managing. But I have this aversion to going to therapy–talking about my feelings is best done at several layers remove, through fictional characters, and joking self-deprecation, don’t you know. Yet, adapting Parable of the Sower, [and Parable of the Talents], watching this dystopian hellscape America lining up with the political realities of 21st century America, tossing all that in the depression stew… you spill it on the… t-shirt… and… metaphor… uh… it sucks?

Not that any of this white boy neurochemical angst compares to the constant grind of having your kids torn from you and put in cages, or having the cops called because you were… standing somewhere with dark skin, I guess? Shit don’t compare, and that’s hardly new. And I suppose that’s the hard pill to swallow of the Parables, really: The future is easy to predict, because look at how we always treat each other.*

(*I mean, the above paragraph was typed out almost a year ago and it remains evergreen, sad to say.)**

***{Cosign a couple months after that.}

But, at the same time, look how far humans have come. We started at the bottom, now we here. Where once the Trade Federation of Phantom Menace were racist stereotypes, now Asian-American women are well represented in 1/3 of 21st century Star Wars movies.** There are Indigenous and Muslim people in the U.S. Congress.** No one in the continental U.S. is being burned at the stake for witch trials. **

[**So, clearly, all of this was written in 2020. Witches being burned at the stake happens in Talents, brought on by supporters of the presidential candidate promising to “make America great again,” but so far the same hasn’t happened here. So maybe some of Octavia’s predictions were off. Except Talents also includes family separation and concentration camps, so maybe not.]

At any rate, I fully realize how illogical it is for me, this cis hetero white male, happily married and blessed with a couple amazing kids, getting to succeed at his dream job of making comics, to be depressed. But I can’t help it. I so often feel so sad. For the world, and who we let run it. For the people we love, and how that love gets twisted into stupid hate for other people so quickly and easily. And, really, just for no good reason other than that’s the direction the brain steers me.

The Parables are a rough reaping to sow. They are an unblinking, stone faced, what-the-fuck-you-gonna-do reminder that victory in the long-term struggle means unavoidable short-term losses. That maybe, at the top of the insurmountable, just over the event horizon, there might be a bit of something worth a damn. If only you keep climbing even after you backslide. If only you fight to break free even after the singularity claims all the gravity for itself.

Beyond the answer to the question, “What’s the best webcomic ever?”