Somewhere around 30ish and/or 14ish and/or 7ish years ago, I broke into comics. Depending on what counts.

If you count just any old comics-making, we must travel back to my oft-told tale of how I became obsessed with Spider-Man at the tender age of 6, when my dad grabbed me a copy of Marvel Tales #192 from a gas station spin rack. This issue reprinted the famous “The Night Gwen Stacy Died” storyline. 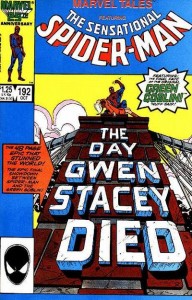 I was sick, or getting sick, some kind of gross cold, so when I read a panel of Peter Parker hacking up a lung while I was simultaneously hacking up a lung, my six-year-old brain understood something very profound:

Well, as much as I could be with Spidey jammies and little-to-no-access to irradiated spiders. Work with me here people.

Anyway, in my desire for more Spider-Man comics, I did the only thing that made sense: I started making them. Over 100 issues, as I recall, because I felt the need to keep a running tally of the epic pencil scribble battles on cheap drawing pad paper, each of which, it seemed to me, would some day be a collector’s item.

Alas, the year was 1986, and I suspect either Watchmen or The Dark Knight Returns or Maus eclipsed that classic “The One Where the Webby Oblong Circles Shot Scribbles at the Stack of Deflated Ovals That I Think Are Supposed To Be Kraven The Hunter.” Comic book fame was not meant to be. But nonetheless, that’s how I broke into comics about 29-30 years ago. If that counts.

If that doesn’t count, the year 2001 might. That was when my hetero-lifemate Dann Tincher and I decided that maybe we should go back to our shared childhood dream (ask him about his Teenage Mutant Ninja Turtles vs. Vampires story) of making comics for a living. And the first step towards that (as was often the first step with Dann in those days) was self-publishing. Thus began Whisp. 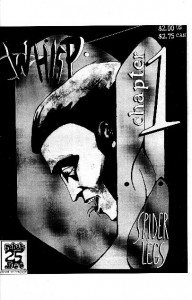 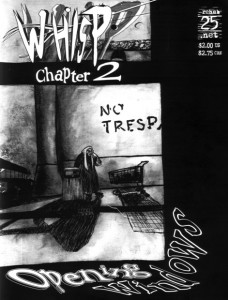 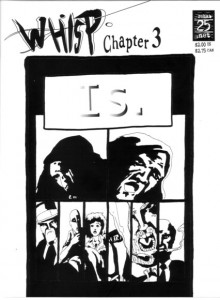 Whisp started out especially inspired by Brian Michael Bendis’s pre-Marvel crime comics, like Jinx and Torso. The books mixed with our shared love of film noir and our shared pretensions towards making art comics, with the sorts of formally experimental aesthetics and narrative conventions that are only possible with comics. So we put in ridiculous hours in Dann’s basement apartment putting and re-putting together the first issue. I lettered the book twice, stumbling up the steep learning curve of using Adobe Illustrator to make word balloons with tails that don’t look like bananas.

And we submitted the book to Diamond Comic Distributors, the one major distributor to all things comics shop, and our shadow-drenched, experimental, indie black and white sci-fi noir about drug addicts that can see the future went on sale to direct market retailers nationwide.

And sold 200 or so copies. It did not set the ICV2 charts ablaze. (But it still did better than my Illegible Spider-Man series, which was read by me, and possibly my mom).

Ah, but these were the halcyon days of yore, when Diamond would give titles three entire issues to crest 1000 orders before being dropped. Orders only went down after #1 though, as direct market orders are wont to do, but it got three issues out the door, issues Dann later colored, all of which are online, including a portion of the still-unfinished fourth chapter. Then life did it’s getting-in-the-way thing, we moved on to other stuff, and only someone injecting fictional psychoactive prognostication juice in their tear ducts knows for sure if the series will ever see completion.

But nonetheless, that’s how I broke into comics, like 14-15 years ago. If that counts.

If that doesn’t count either, 2008 must, because 2008 was when Doug Fogelson of Front 40 Press, in all his insane glory, saw fit to publish The Hole: Consumer Culture, v. 1: Open.

Created by me and my other comics BFF, the world renowned Prof. John Jennings, The Hole was the first graphic novel I wrote that was published by someone other than me. That has to count as to breaking into comics, right? Whatever comics is.

The Hole is also sort of the reason I find myself reflecting. Recently John and I (the once and future J2D2) had the distinct pleasure of being artists-in-residence at Vassar College, thanks to the awesome Ariel Nereson, Interdisciplinary Arts Coordinator for the Creative Arts Across Disciplines Initiative at Vassar, who read the book in grad school. Part of this residency included a public lecture on our work.

And, in the midst of putting together images for the talk, I realized (after consultation with my wife, keeper of all knowledge chronological) that John and I have been collaborating for a solid decade. Yes, because: time. I get that. But still, it’s a weird thing to come upon, the implicit history of your creative life laid out in front of you. Weirder still to have a docent lead you to it in an art museum. 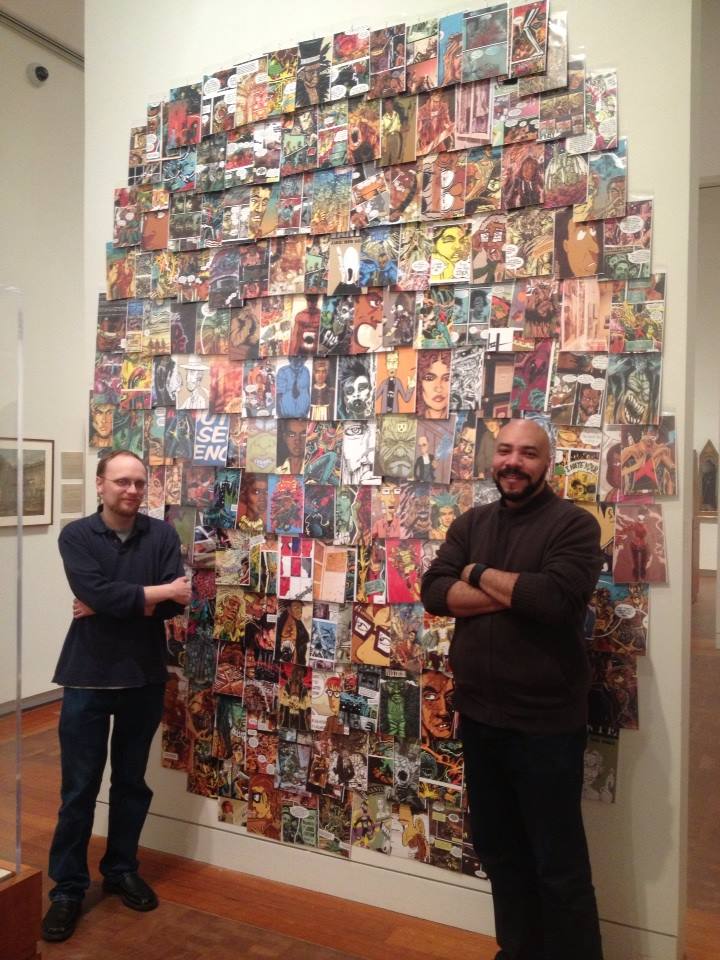 That’s 200 images on a museum wall at Vassar’s sampled from a bunch of stuff John and I have worked on over the past ten years.

Or maybe just building comics into me.

In moments like this, with our images on the wall and our graphic novels open in front of classrooms full of students, we find ourselves reflecting.

Finding out that in fact, we came back. We were always coming back.