Two of the three comics adaptations I’ve written prior to Kindred involved expanding on the original prose work, rather than winnowing a longer work down. They were also relatively short works. “Trees You Can’t Climb,” the adaptation of John’s short story I discussed yesterday, was maybe 6 pages based on something like a 3 page story (I’m not near a computer that has any of those files so that could be totally wrong). And the adaptation du jour is 20 pages, based on a 6 verse poem.

Well, 7 sort of, although the seventh verse is just a period–we’ll get to that.

“No Ark,” the poem by Dr. Deborah D. Grison on which “Day 8” is based, was written in response to the government neglect and mismanagement that lead to the national disaster that followed the natural disaster of Hurricane Katrina in 2005. The poem is written from the perspective of someone trapped on their rooftop, dying over the course of a week while waiting to be rescued. Each verse of the poem represents another day spent waiting, wracked by the heat and cold, suffering from dehydration and hunger, until the 7th and final verse, which is just a period, “.”, as in a full stop. I took that to mean the narrator dies at the end of the poem.

That’s one reason why, in my first draft of the story, I wrote that the character dies, his body not found until several months later, as was often the case in poorer areas affected by the flood in New Orleans. In defending this narrative choice, I argued I was just trying to stay faithful to the original text, which is certainly true. But I was also angry at what I saw (and still see) as the racist and classist underpinnings of America, prejudices made manifest in the sloppy indifference with which poor, mostly brown people, were treated by a government that was better at war profiteering than protecting its citizens.

Ah, the Bush years. How far we’ve come since then.

Unfortunately by “we,” I really only mean “‘Ye.”

Spoiler alert: a decade later, things in New Orleans are mostly only better if you’re rich and white.

Anyway, yes, expressing anger through art. (See, also, e.g. The Hole: Consumer Culture, and my creative output for the next 4-40 years). But in the case of “Day 8,” the audience wasn’t in an art gallery, it was a wide swath of academia. “Day 8” was produced as part of a 4 day conference held in Septmeber, 2006 at the University of Illinois in Urbana Champaign, called “Katrina: After the Storm – Civic Engagement Through Arts, Humanities and Technology.” The comic was to be posted on the confernece website, and printed in the back of the conference program. And the conference organizer who recruited John and I (and Dr. Grison) was of the opinion that the death of the character at the end of the comic was contrary to the summit’s core focus: using art and technology to address and improve the systemic dysfunction laid bare by the hurricane force winds.

Nobody wanted to see a fictional dead body when they were trying to think of ways to make things better.

And this is how the comic came to be called “Day 8.” Because I added an extra day, not found in the poem, where the narrator–who, in the comic, became a high school English teacher living in 9th Ward named Mr. Jenkins– was spotted by a passing helicopter and rescued.

The means of Mr. Jenkins’s rescue was occasioned by an allusion in “No Ark” to the famous line from Samuel Coleridge’s “Rime of the Ancient Mariner”: ” Water water everywhere, Nor any drop to drink.” In the comic, the Coleridge allusion became a Coleridge book the narrator finds in the wreckage of his house. Mr. Jenkins begins writing the text of “No Ark” (i.e. the narration of the comic) in the margins of the pages of the poetry book. On the eighth day of being stranded, a loose page from that book is caught in an updraft, and…

Well, see for yourself: 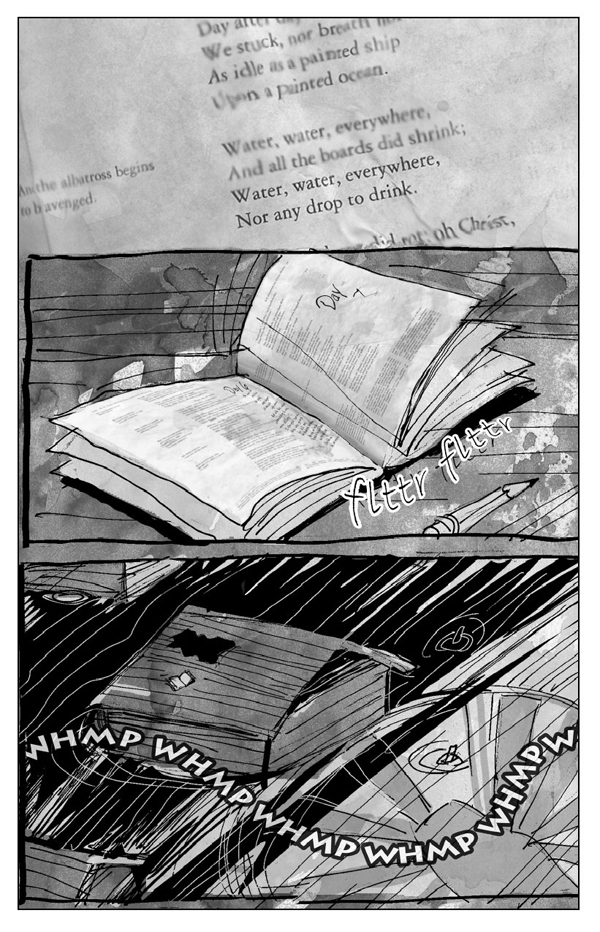 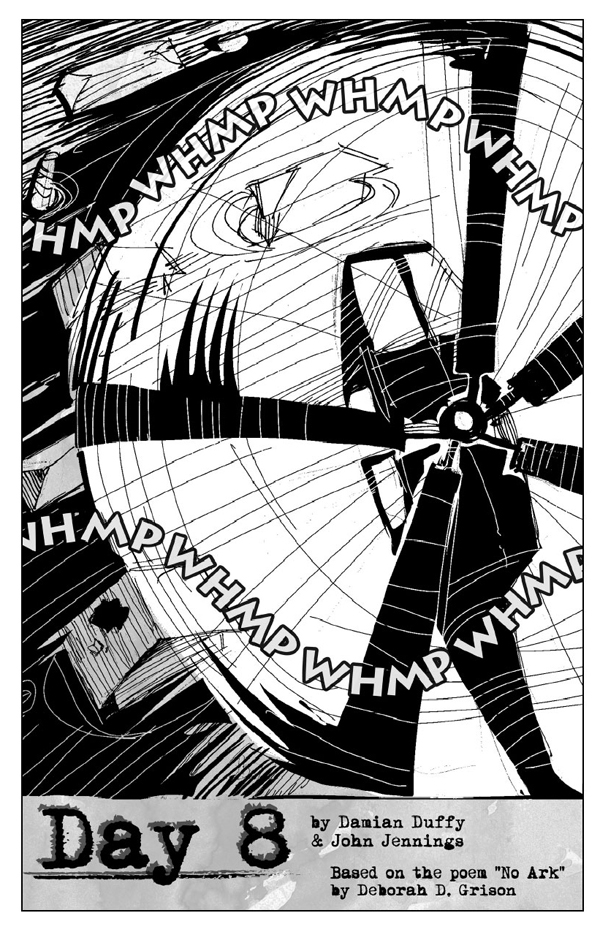 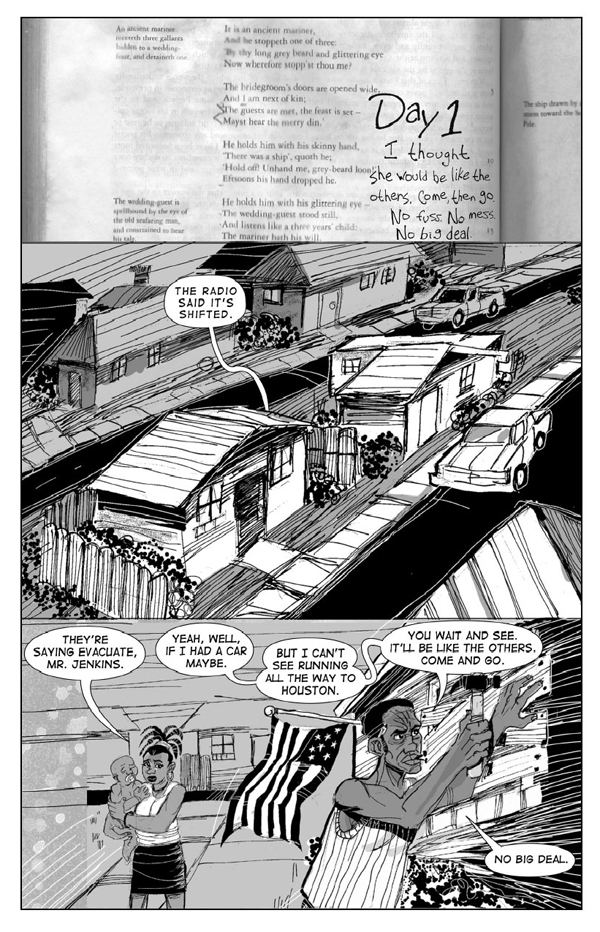 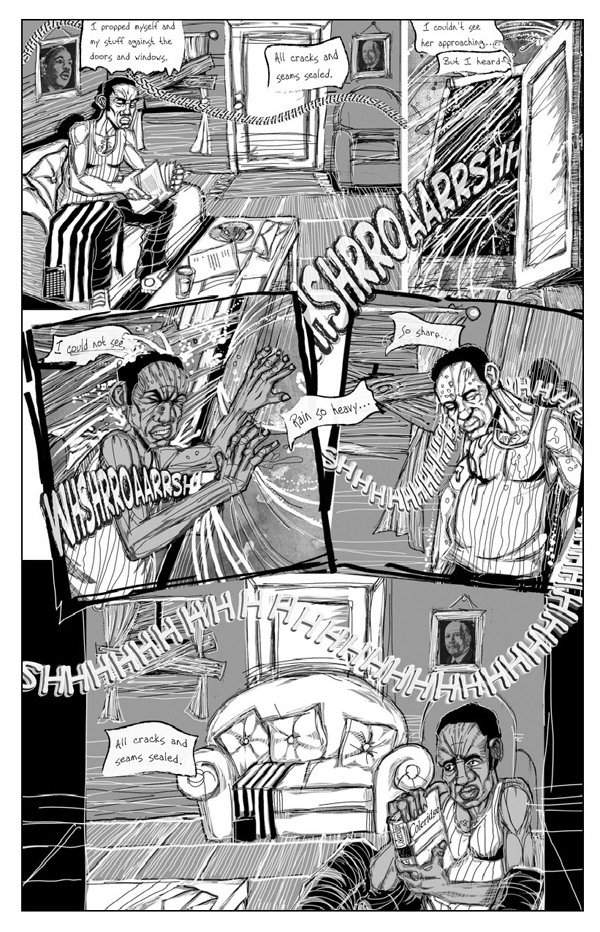 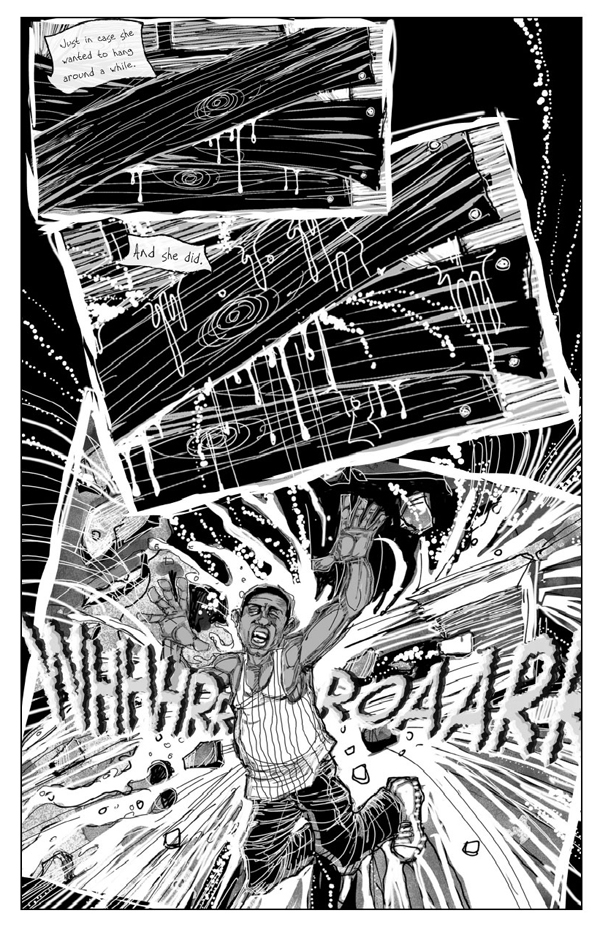 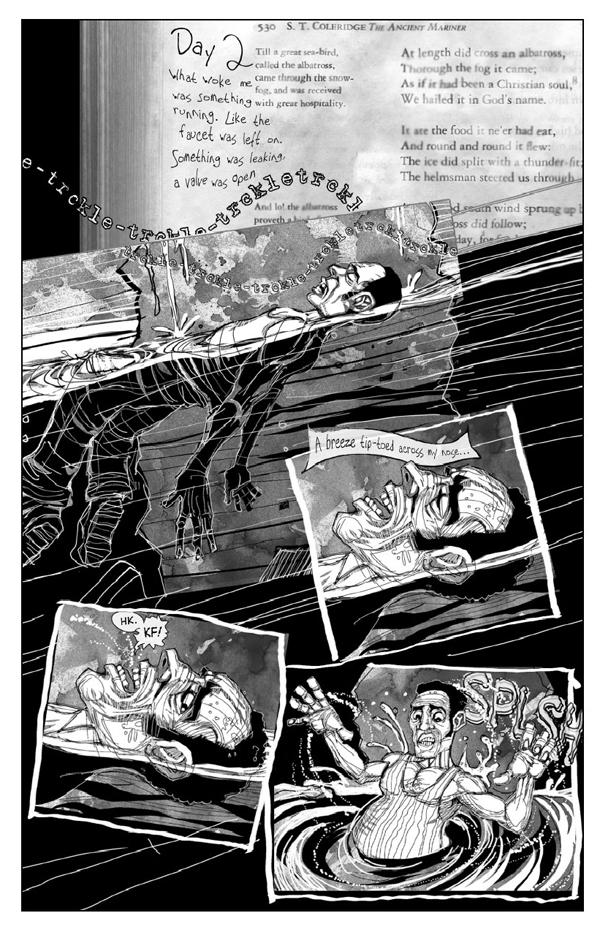 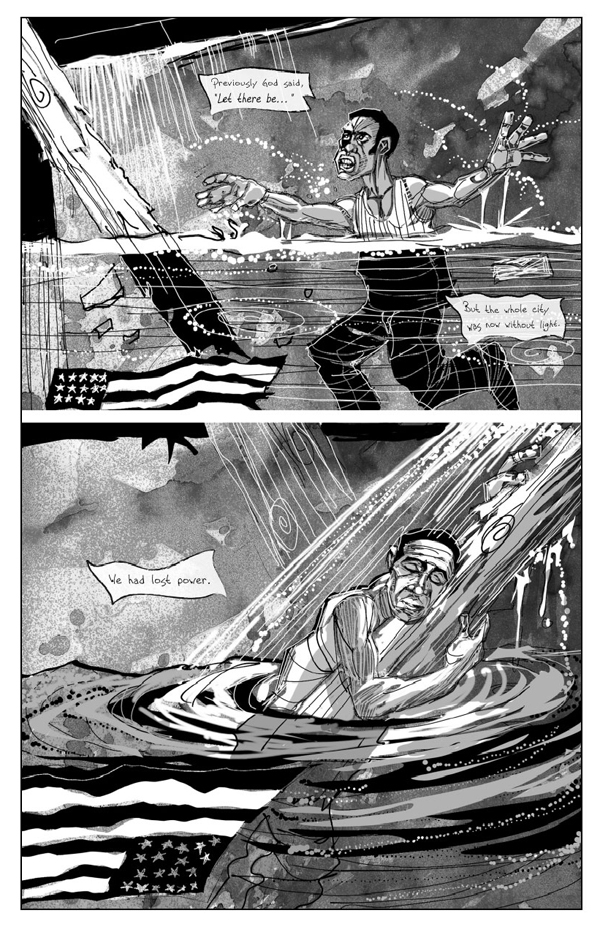 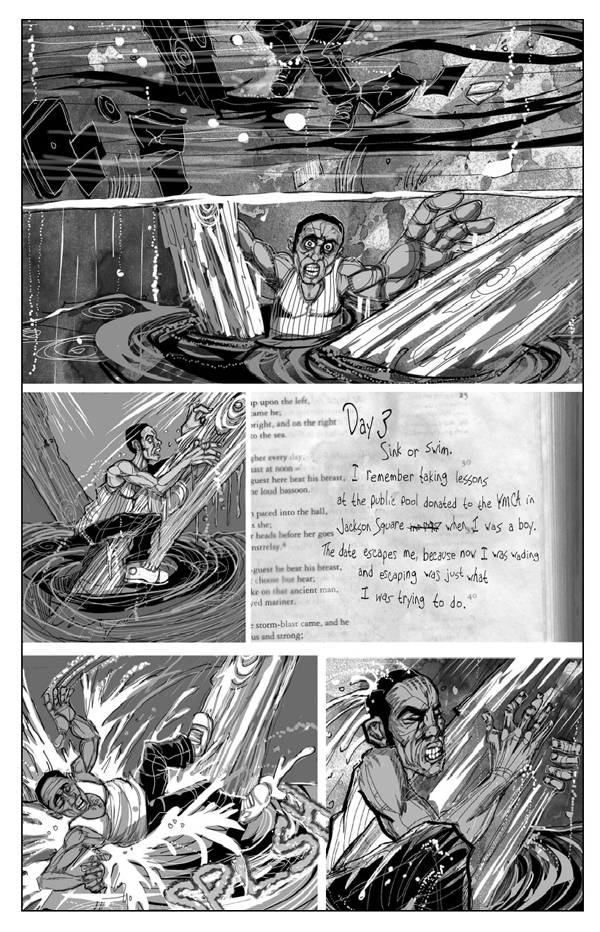 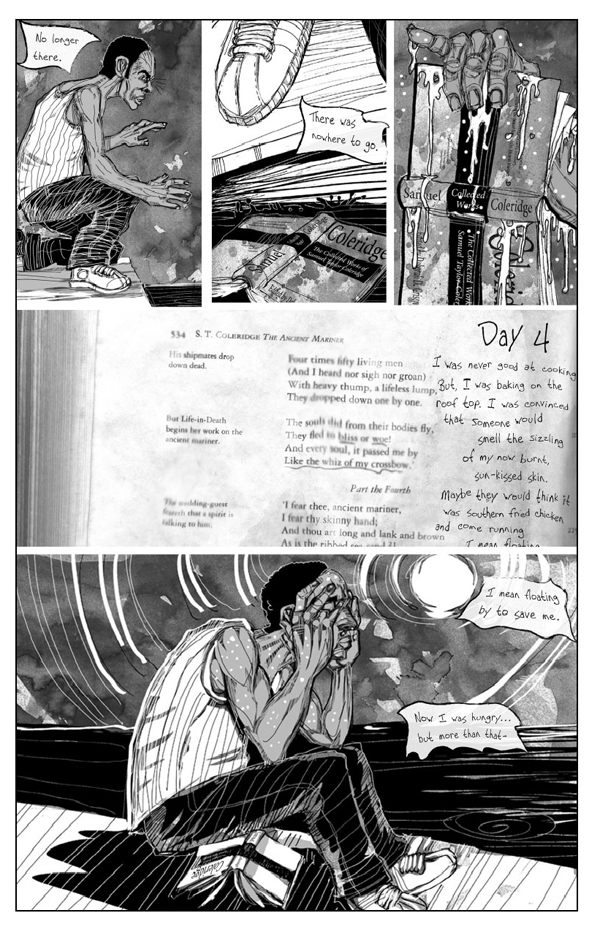 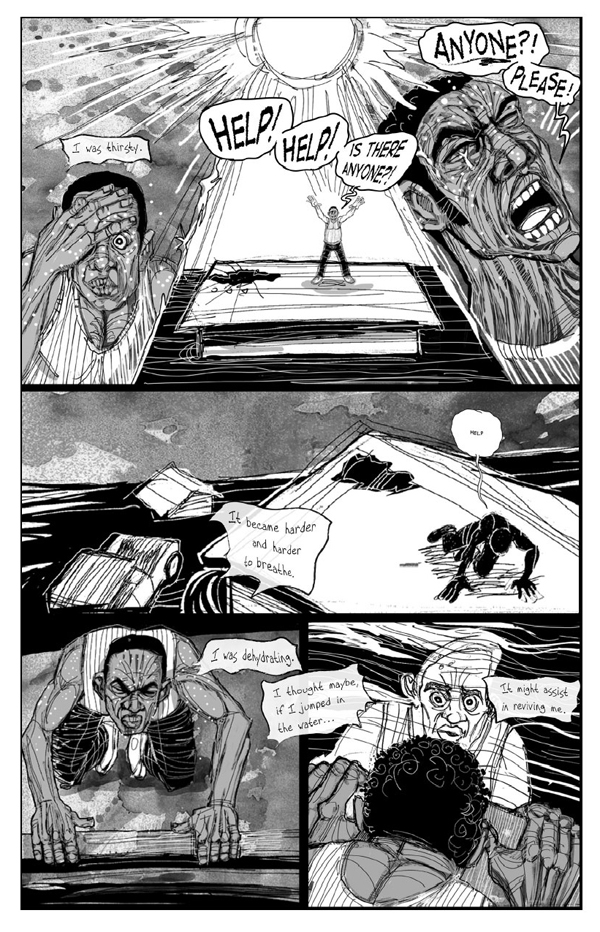 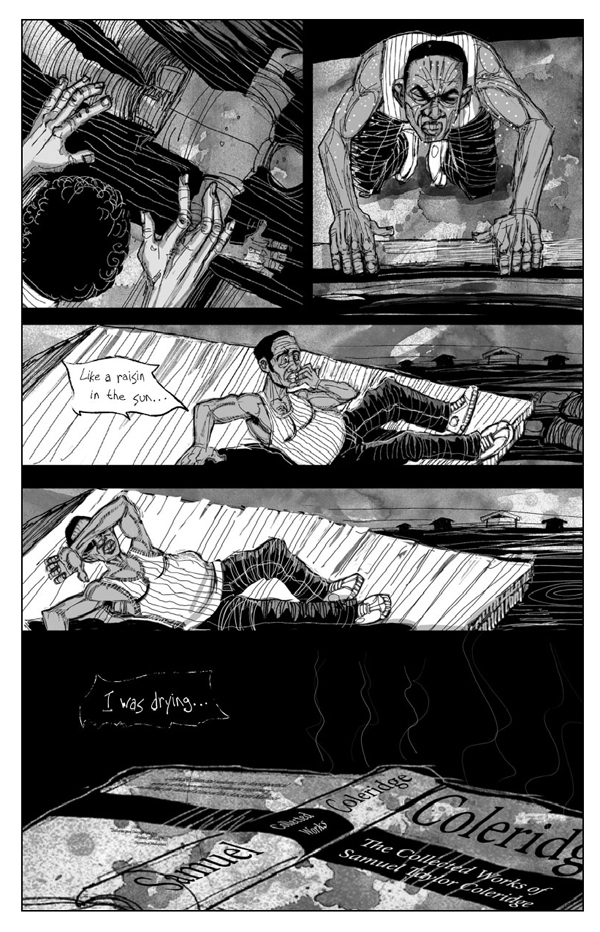 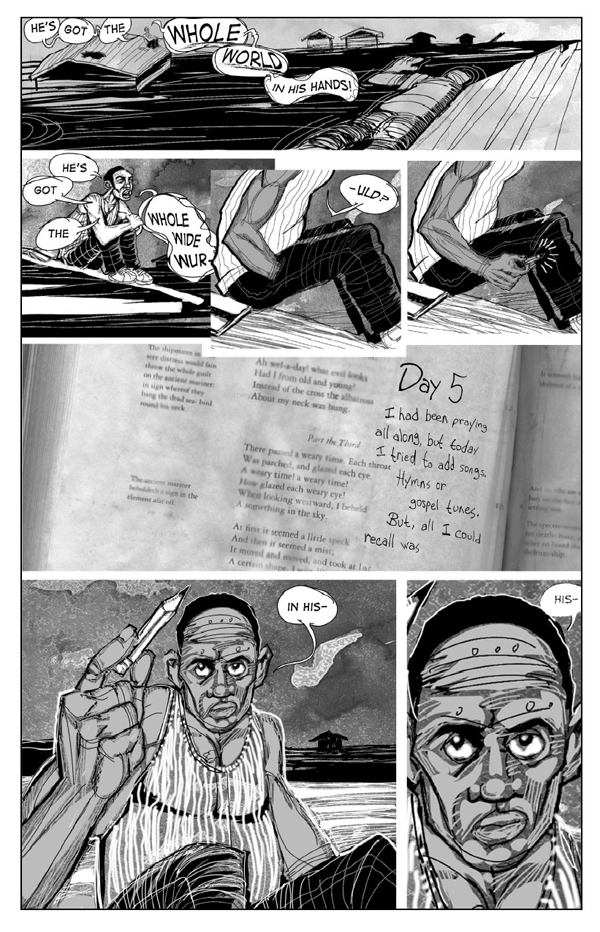 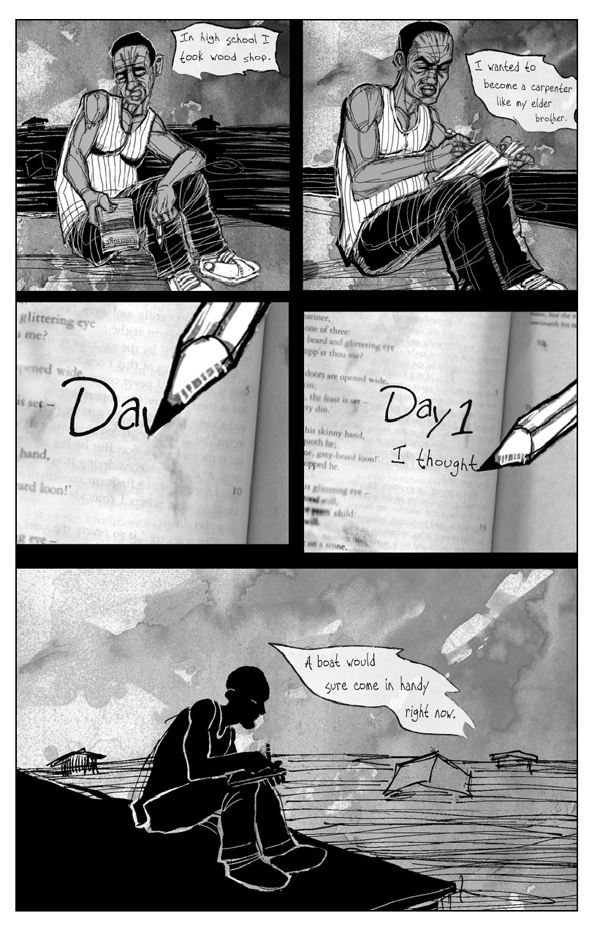 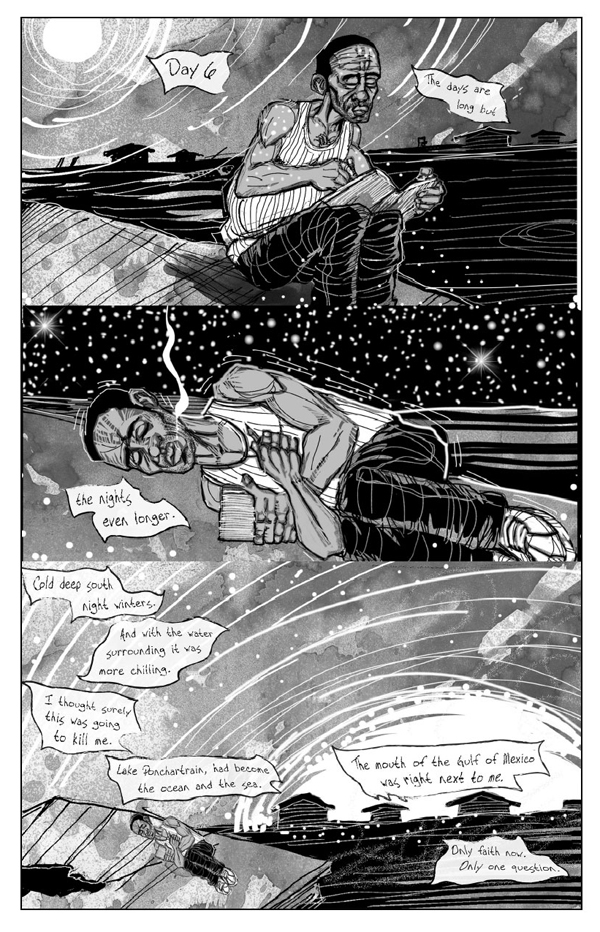 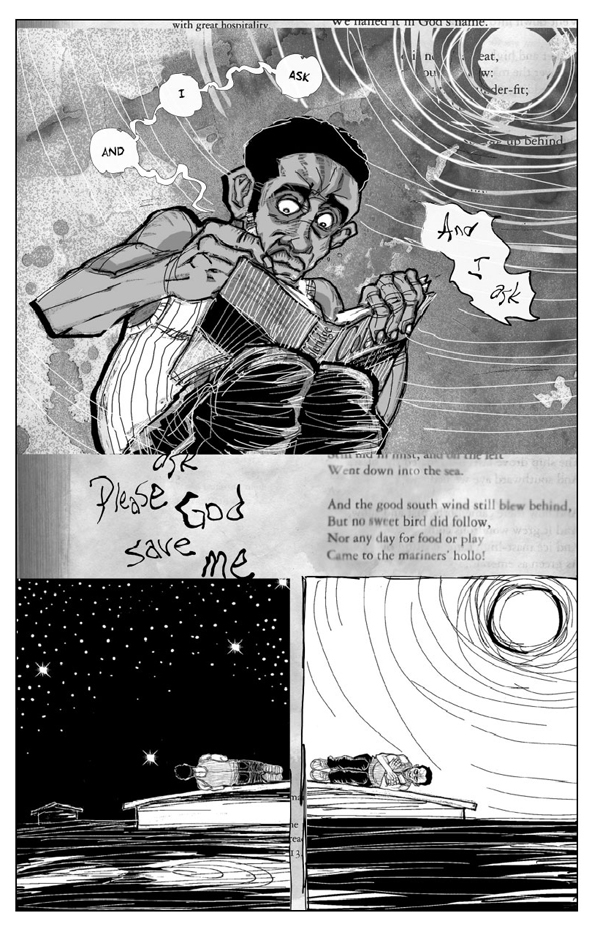 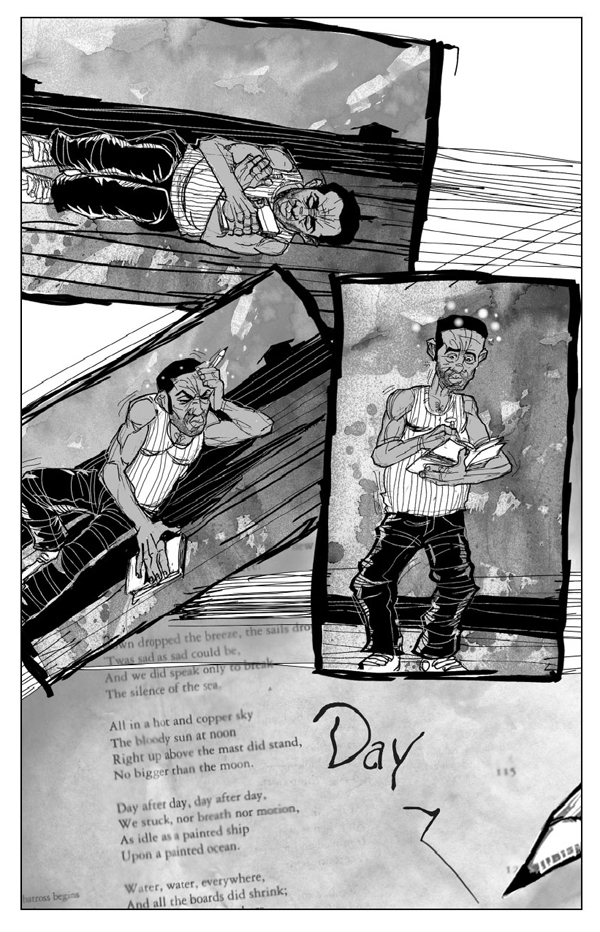 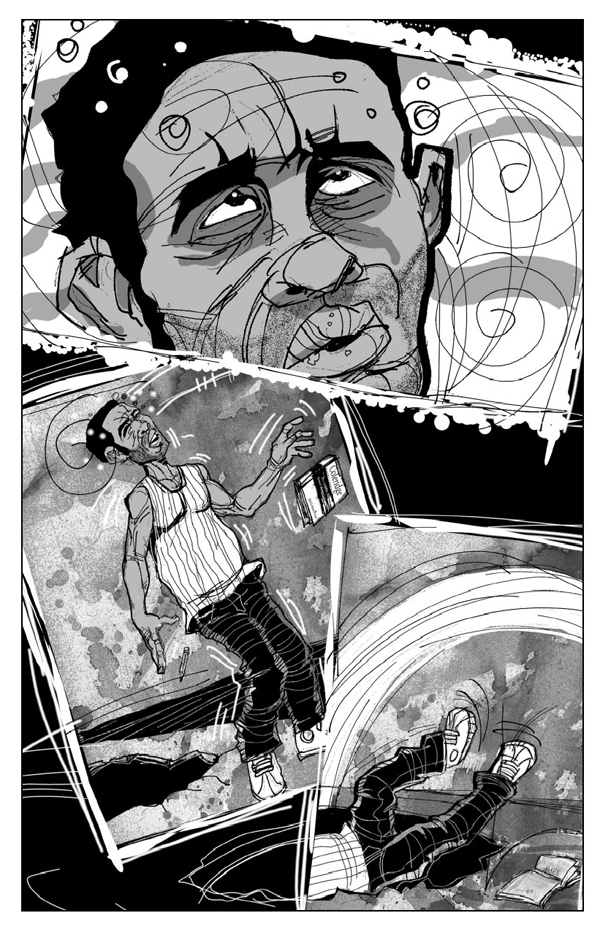 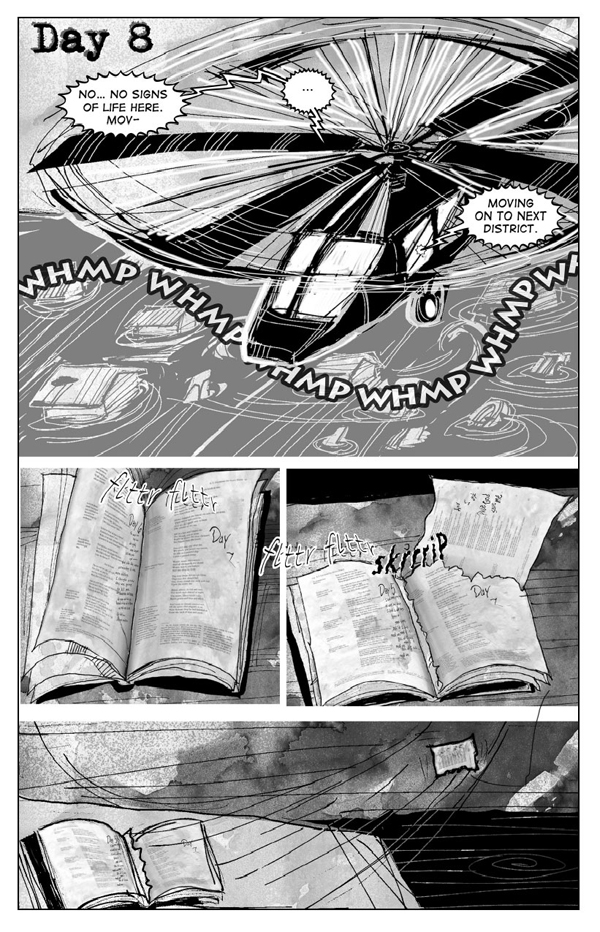 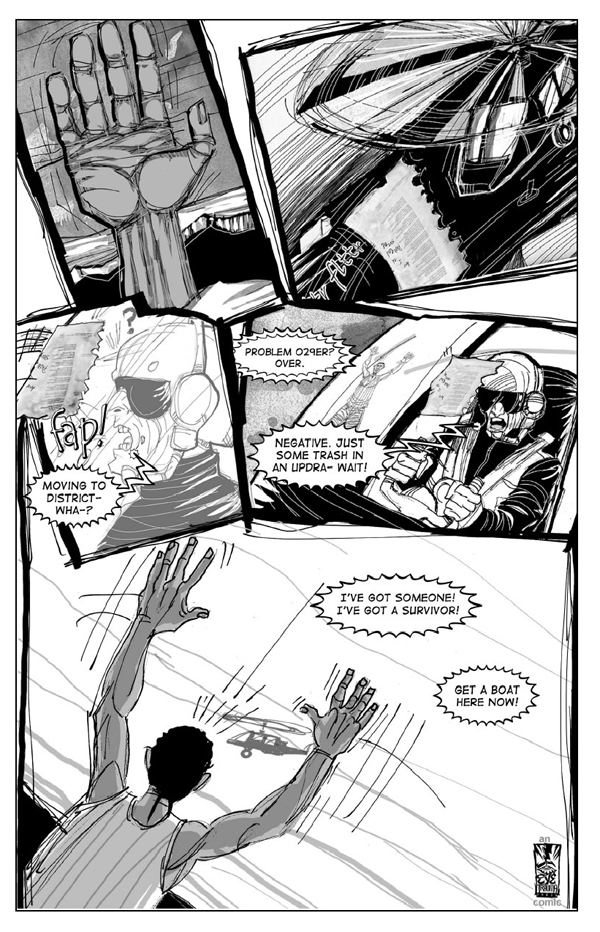 To be honest, I worried the ending was sort of a cop out, because I’m generally pissed off about the state of the world. But I left it up to Dr. Grison, and she really dug it. So did everyone, it seems, to the extent that the comic was nominated for three Glyph Comics Awards. (Didn’t win any that time; the Stagger Lee graphic novel beat us like we’d taken it’s Stetson hat. But still.)

And besides, if you need some white-boy rage-via-fiction over post-Katrina New Orleans, there’s always John Goodman in Treme:

Tomorrow, the third and final pre-Kindred comics adaptation I wrote, and actually drew. (Not to worry Jennings-fans, John colored it). Also my first comics adaptation of non-fiction, and my first experience with having to edit down, rather than expand out from, preexisting prose.

Goodnight 2005 Kanye, wherever you are.

See you tomorrow everybody else.