I live not far from the town of Homer, IL, where they recently had their annual Soda Festival. I’ve never been myself, but I hear it is a thing to do here in East Central Illinois. However, like so many correct people on the Earth, I don’t drink soda, I drink pop. Because that is what you call the high fructose phosphates in their pressurized aluminum cans and plastic bottles. Don’t let my wife, or anyone like her, tell you different. Soda is the bubbly water you put in cocktails. Hence, club soda.

Anyway, to retaliate for this holiday misnomer, I decided to go to what I assumed was a competing Indianapolis celebration of colas, root beers, and wide variations on the classic mutant flavor, lemon-lime.  Sadly, it turned out this was a Popular Culture Convention, and not the Pop Drinking Confabulation I’d been expecting.

I say all this, not just to get my wife to punch me, but also because, besides that lame joke, I don’t actually have a lot to say about the PopCon. I went to the convention more as a social thing with, lucky enough to haunt an extra seat at the artist alley tables (conjoined like lemon-lime) of Little Guardians creators Ed Cho & Lee Cherolis, and designer & illustrator Samantha Kyle. I was lucky enough to get my last few sale copies of Black Comix to Downtown Comics, but I didn’t have a table, didn’t go to sell, didn’t really have a dog in this particular fight. Or, for a more humane metaphor, I didn’t have a baby in this particular baby race.

What? The babies aren’t fighting. Geez.

But I recognized what many of the artists I spoke with were feeling, because I’ve been there a bunch of times myself. It gets to be a long weekend when you’ve got a table at a sluggish con, because conventions are costly for artists, and sitting behind that table when no one’s stopping up front to buy your wares can be the perfect time to visualize each and every dollar spent on said convention sprouting wings and flying out of your pocket, out a window, and up into the sky, where it’s summarily shredded into confetti by the engine of a passing jet.

A lot of artists were not selling a lot of books, in other words. The aisles were not what you would call overcrowded, and it seemed to make for a glum experience in Artists Alley.

That may just be a function of the large venue, and that may not be an accurate portrayal of artist sales. Introvert that I am, it’s not like I talked to everybody. The other thing I heard was that another Indiana Comic Con in March was in a smaller venue, and ended up turning people away which, while indicative of the audience for comics conventions in Indianapolis, might have stolen the thunder of Indy PopCon. If I visited a con two months ago I couldn’t imagine going to another one unless it was in my kitchen. And even then, it would depend on how much food was in the fridge.

It was also suggested the sort of diffuse nature of “PopCon” as opposed to more comics specific “Comic Con” or even (and I hate myself for saying it) the more beverage specific Soda Festival of Homer, IL.

Or maybe they were the exception, the artists I met. It seemed like a nice convention for fans and cosplayers, and perhaps the other assorted exhibitors did well. Independent games and podcasts had their own presence, for example, and maybe the PopCon was where they get their audiences to blow up. Even though this is the internet, whose lifeblood is baseless conjecture, I honestly don’t have any idea how the con did in terms of attendance, exhibitor sales, etc.

The diversity of exhibitors, if not the density of attendance, reminded me the thing you learn as soon as you set eyes on San Diego Comic-Con: This stuff has grown, and is growing, but it has its limits. In the wake of Hollywood’s discovery of geekitude being a money maker, where every other blockbuster is a superhero, and every other TV show is a dark, edgy, more realistic take of a superhero… I mean, all my comics peoples, show of hands, ten twelve years ago, who the hell thought they’d be talking with non-comics-reading friends and family about a freaking Green Arrow TV show?

It seems like all this is something I should be excited about, but somehow the thriving American geek celebration/exploitation on display at pop culture conventions, even when I’m not sitting at a table, makes conventions feel like work. Which is great, actually. Not complaining that I’ve reached one of my childhood goals of being, by the strictest definition of having been paid for and paid taxes on my work, a pro. Says so on my con badge, even. Sometimes. Depending on their labeling scheme.

I remember being that kid, thinking how awesome it would be to be able to sit behind the table, or talk up on the stage, and it is, but… I don’t know, even when I walk in without a plan or a table in Artist’s Alley, and I’m just hanging with friends, I still feel like I need to do some business, stay on my comics grind, as it were.  And with that comes this bit of nostalgia for those days when the registration line and the convention floor filled me with a sense of wonder and excitement that’s been supplanted by grown up pragmatism.

I guess I’m getting old and putting away the childish things, the boxing glove arrows, and moving on to the fine grown up pursuits of buying overpriced t-shirts for my kids. 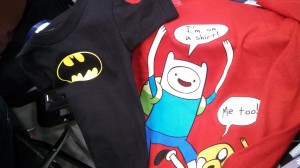 Because for some reason $35 for 2 seems like a good deal when you’re surrounded by people dressed like Deadpool eating $9 hot dogs.