FYI: Back in 2010-2011, I used to blog about comics and race issues at blackcomicbook.com (which is no longer up, so if you want to look at it, to the Internet Wayback Machine with you). Due to a bit of unfortunate miscommunication, I didn’t save the website when it went down, and no one else did either.

There was a fair amount of writing I liked on that site that I wish I still had. This one piece here though, this is one I’d like to make sure exists somewhere besides the Internet Archive. (P.S. I love you Internet Archive.)

And so, I paste thusly, this write up from 2011 (which is why a lot of the comics cultural criticism is somewhat dated) regarding Milestone Comics and the late great Dwayne McDuffie.

For those of you who were unable to make the Black Comix panel at C2E2 2011 this year (or, if you came in late and were among the crowd of folks standing in the back of the shoeboxish panel room, civilly disobeying the fire code) here’s an edited version of what I had to say during our opening tribute to the late Dwayne McDuffie:

The one time I met Dwayne McDuffie, he told me I was wrong.

I met Dwayne at the Glyph Comics Awards ceremony, the night before the 2007 East Coast Black Age of Comics Convention. John and I were there because our Katrina story Day 8 had been nominated for a few Glyphs (and then Stagger Lee whupped our asses, as one expects from Stagger Lee). Dwayne was there as a guest of the convention. But, this wasn’t the first time I’d been in contact with Mr. McDuffie. A few months earlier, we’d corresponded over e-mail about an art show called Other Heroes John and I put together at Jackson State University in Jackson, MS. Dwayne was kind enough to write a foreword for the catalog for that exhibition. In return, we’d sent him a copy of the book. That night in Philadelphia, before the Glyphs ceremony, Dwayne told me what he thought of the catalog. He said he’d liked it, for the most part, but that we’d gotten something wrong.

One of the essays in the book, that John wrote and I edited, was about the evolution of the black superhero in mainstream American comics from the 1960s to the present. Naturally, in this essay we mentioned Milestone. And, naturally, that was where Dwayne took issue. In that essay we made some reference to the Milestone line closing in the 1990s. Dwayne’s point was that Milestone never closed. Milestone Media remained and remains a viable company, licensing its characters to DC Comics for the current Static and Xombi series, the Milestone Forever books before that, and producing the Static Shock animated series before that. Of course, in the essay we only meant that Milestone had ceased publication of its initial line of comics, but, in the grand scheme of things, Dwayne McDuffie was right: We were wrong.

We were wrong in a way I think a lot of people are wrong, when they tell the story of Milestone. When I have occasion to get tangled in the comics-related interwebs, and I come across discussions of Milestone Comics, it tends to be described as a failed experiment. Sure, people recognize the historical significance of the characters in the face of a continual paucity of multiculturalism in the comics “mainstream,” and yes, people acknowledge that some of the characters have lived on in fictions created a decade after they were first introduced, but the overall tone of the Milestone narrative, as told in the comics industry and comics fandom, seems (to me) too much one of endings. Of closings. Of failure. Anyway, the other thing that tends to come up in conversation about Milestone cite a few causes. Creative tensions. Editorial and managerial issues. The overwhelmingly white male demographic of American comic book readers (i.e. local comic shop patrons), coupled with the persistent and noxious myth that white readers are either unwilling or incapable of identifying with comics characters of color.

And what I’d like to say, what I’d like to suggest, is that Milestone Comics didn’t fail, comics failed Milestone. Comics failed Milestone in much the same way comics failed female readership. For decades, the myth in the American comics industry was that “girls don’t read comics.” Then manga blew up in the book store market of the early 2000s, especially among teen girl readers, and we saw that myth for what it obviously was. It wasn’t that “girls don’t read comics,” it’s that “girls don’t read YOUR comics.” They don’t read the T&A punchfests that continue to dominate Marvel and DC, that have knelt so long and so persistently on the windpipe of the comic shop market, stunting any real diversity, multiculturalism, and growth in readership and the industry as a whole.

The same holds true for the idea that “Black books don’t sell,” the other ridiculous myth that hangs around the last vestiges of the Direct Comics Market, which has too often had a talent for viewing an addressable issue as an insurmountable natural formation. Sure, Milestone had creative tensions, editorial and managerial issues, and launched close to the bursting speculator bubble of the mid-to-late 90s, when people who thought they were paying for their retirement with chromium embossed copies of BloodDeathKickFace #0 wised up. I’m not saying all that’s not true too. But, a decade or two down the road, the viability of the Milestone characters, their longevity and their quality seems clear. Nonetheless, the Green Lantern in the movies is white despite the fact that the majority of GL fans in younger demographics know John Stewart, the African American Green Lantern from the Justice League animated series. Nonetheless, one of the few African characters in superhero comics is now the American Panther. A lot of the big name corporate superheroes with any notable melanin content don’t make it out of the Various and Sundry Infinite Crises alive. Nonetheless, the overall culture of American corporate superhero comics, now being reproduced on screens big and little, silver and HD, remains a culture where diversity is reduced to tokenism, where people of color are sidekicks and extras and temporary fill-ins until the “real” white hero from the 60s is reincarnated.

My point is this: One of Dwayne McDuffie’s legacies is that, if you care about multiculturalism in comics, you should do something about it. If you’re a comics creator, create stories about characters from diverse backgrounds. If you’re a comics fan, stop buying the books from the corporate publishers that have, demonstrably, little to no interest in telling stories about characters with diverse viewpoints. Stop supporting a comics culture that flinches when crazy racists flip out about Idris Elba playing Heimdall in the Thor movie, instead of answering with the only sane response: Idris Elba should have played Thor! 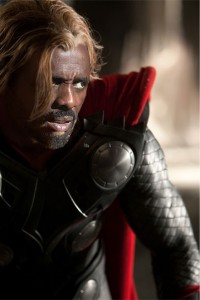 Support some of the independent artists (such as those we try to feature here at Black Comix) who are pushing the comics medium in new directions. In opening the medium to voices outside of the white male power fantasy. Dwayne McDuffie didn’t just complain about the monoculture of American comics. He walked the walk. He put out comics with all sorts of different people in them, with all sorts of ideas about what it means to be human. But the American comic book industry didn’t much want to hear it. Still doesn’t. But now, graphic novels and webcomics and independent publishing all offer alternate outlets for the wonderfully varied culture that has always been there, on the margins of the corporate intellectual property maintenance and licensing most comics press focuses on. There are other stories to be told, other voices to be heard, that respect things besides drawings of big fists and boobs.

So, if you say you care about this stuff, if you want socially equitable cultural representation, if you’re bothered by the way Disney and Warner Bros. treat your childhood heroes, here’s what you do: Stop dropping money on the latest CrisisWarInvasionCountdownToFearItself tie-in issue, pick your head up, and look around. Put your dollars down on the artists and stories that value diversity.