“Over and over, I was told, ‘Write what you know.’ I never give that advice. I saw write what you’re interested in and research it. I wrote to get away from what I knew. What I knew was boring. … I couldn’t get away from it physically so I got away mentally” Octavia Butler (quoted in Knapp, 1996).

According to Gerry Canavan’s 2016 Modern Masters of Science Fiction book on Butler, the author was “famously and repeatedly refused attempts to reduce her books to commentary on contemporary racial politics” and sometimes experienced an “unhappy tension between being a science fiction writer and a black writer.”

On the one hand, Canavan goes on to write, of course Butler’s books engage with racial and feminist politics. But on the other hand, I get that resistance to having someone attempt to reduce your work to something simple. I mean, the politics of all of Butler’s novels are sophisticated and complex. In Kindred, there are no easy answers.

I’ve had students reading the book ask me what I think the “moral” or “theme” of Kindred is; who’s the good guy, who’s the bad guy. And I think I always frustrate them because I have to keep reminding them: it’s complicated. It’s intertwined and in tension.

And that’s kind of the point. In the 1800s, Rufus’s love for Alice is predicated on Dana’s role in his life. Rufus says he especially told Alice about Dana and Kevin being married. Later Rufus, and Alice herself, discuss how Rufus considers Alice and Dana as two halves of one woman. Dana forgives Rufus certain actions when they come out of his love (“a destructive love, but love nonetheless”). Even Tom Weylin, Rufus’s father, is shown once or twice to exhibit something resembling compassion. Margaret Weylin, Rufus’s mother, is guilty of some despicable things, but when Dana becomes reacquainted with her as an old woman, Dana remarks that every once and awhile they even have a civil conversation.

I think that’s one reason the novel resonates so strongly with readers. The characters are human. Flawed and complex. And so I wonder if part of Butler’s rejection of critical discussions relating her works to politics was that political discourse seemed, to Butler, too simplistic for the intricate worlds she built. 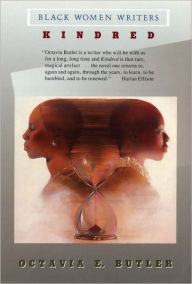