I used thought balloons in Kindred: A graphic novel adaptation.

Which, depending on how little you know or care about these things, is either a controversial statement, or the equivalent of saying they used paper for the pages of the book.

Thought balloons are basically synonymous with comics. Very rarely (outside of cartoons) do you see them used in movies or television. But, in at least some contexts, that’s been a reason not to use them. From a Lettering Roundtable on thought balloons:

John Ostrander: I once had an editor who told me i couldn’t use thought balloons because they didn’t have them in movies. I tried pointing out that the images in movies, well, moved. Were not static. Different medium.

Kurt Busiek: At times, they have. I’ve been lucky enough to work with editors who’ll support thought balloons if I want to do it — and I did, occasionally, in AVENGERS — but I was also told that the EIC and publisher hated them, and looked aversely on creators that used them. […] the objections to any of this stuff boil down, in most cases, to, “It’s comic-booky!”

Of course, the “comic-booky” nature of thought balloons is part of what drew me to using them in Kindred. In the early stages, John and I talked about wanting to make sure the adaptation did things unique to the comics medium. Also, I like that the technique essentially gives Dana two ways of narrating the story. The narrative captions are in past tense; Dana reflecting on the events of the story after they’ve already occurred. The thought balloons are present tense; immediate concerns to the Dana-in-the-moment. 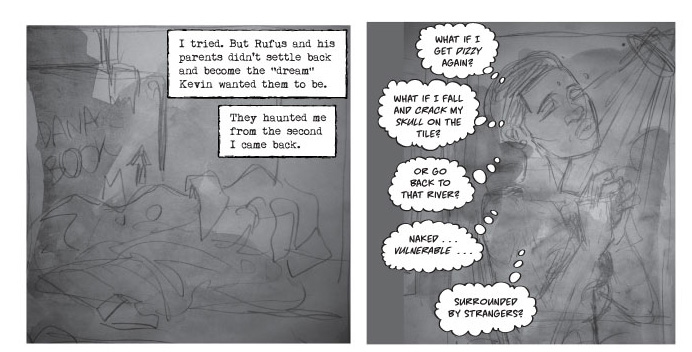 In this example (over John’s pencils) the thought balloons are used to list Dana’s fears after her first trip through time.

In the novel, Dana’s time travel is unspectacular. She’s in one time, gets nauseous, her vision blurs, and then she’s in the other time. We tried to mimic that in the graphic novel. Generally, Dana’s time travel happens in the gutter–in the white space between two panels–with the actual temporal teleportation left up to the reader’s imagination. 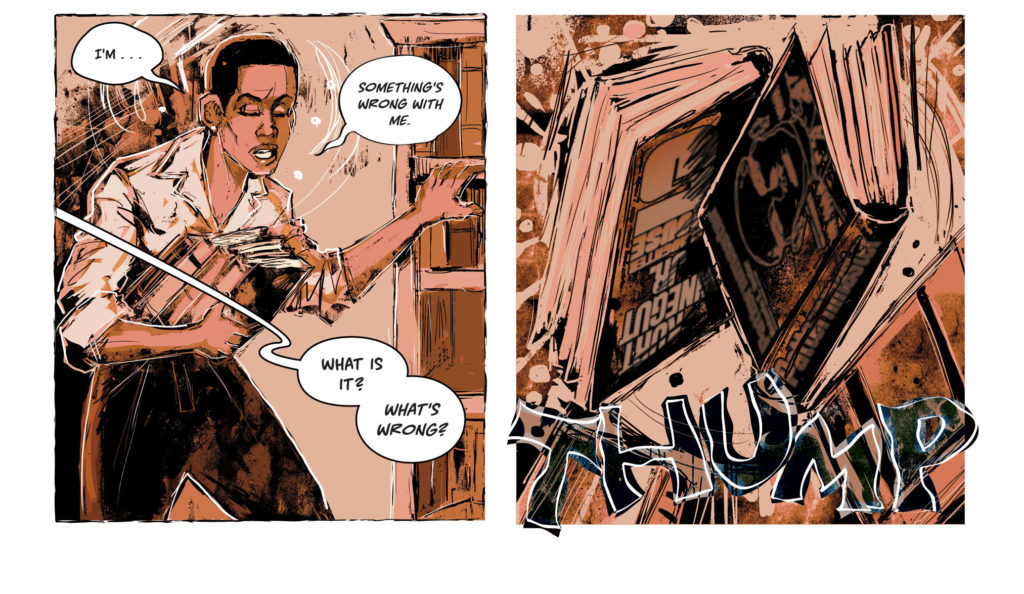